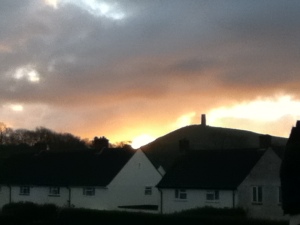 Erm, was that it then?

You were expecting what, exactly?  Epic, Hollywood disaster movie scenarios?  Beams of something-or-the-other from that cosmic alignment with the galactic centre?  The much vaunted birthing of the New Earth/Age/Consciousness?  The End of Time, perhaps?

What if I were to suggest that everything has shifted – in the most fundamental way possible?  Allow me to share my take on the 2012 Shift with you, but remember this is just MY truth.  It may not be yours, and that’s fine.  We all have our own truths now.

When we were very young and new to all this, it was made nice and easy.  If we wanted to cycle, we were given a dear little toddler trike with three wheels for extra stability and in most cases a watchful parent who checked up on us continually.  In Life: A Player’s Guide I call this humanity’s infancy – the time when all the rules were made for us by ‘God the Father’ and we would be rewarded or punished according to how well we behaved.

As we got older we wanted a bit more independence.  We graduated to a bigger bike – one of those brightly coloured ones with the two little stabilisers at the back, just to hold us steady.  We pedalled off, ever further from Our Father and into what we called The Enlightenment.  Here, the twin stabilisers of Reason and Science allowed us to think (or ride) for ourselves, but they held us in check, saving us from tipping too far.  This was humanity’s childhood.

The time was bound to come when we wanted the stabilisers removed.  We longed to ride off by ourselves, taking true control of our journey.  No doubt you remember that transition from your own childhood.  It involved some very painful falls and knocks before you mastered the skills.  Possibly that patient parent was called back into action, holding on to the back of the saddle and puffing along behind you, wheezing, “Keep pedalling! (puff… gasp) I’ve got you…”

I’d argue that this is exactly where we’ve been for the past few decades.  We’ve had an explosion of channelled material,  self-help books, articles, workshops and gurus offering all the support we could possibly need.  Many of us have had dreams, inspiration and ideas from guides, spirit, angels or whatever aspects of Consciousness we believe in.

We’ve grown in confidence with that  guiding hand on the back of the saddle.  But then there’s a moment when we realise we can’t hear the footsteps any more.  They’ve let go!  For a moment we wobble madly, but we stay upright.  We’re doing it – we can ride on by ourselves!

You can build your own reality now.  It’s all been building up to this.

You know that you are made of atoms, and those atoms are made – quite simply – of energy.  It’s your consciousness that decides where you put all that energy.  You’re steering the cycle yourself.  Those are your hands on the handlebars.

So give it a try.  Put your energy into, say,  catching a cold.  Work at it  and you can have one within 48 hours, or decide not to.  It’s not luck or chance.  Many people put huge amounts of energy into being ill.  Others don’t.

I’d suggest getting into the habit of directing your energy into positive places all the time.

I’d suggest giving none of it to judging or condemning yourself or others.

I’d suggest searching out the wonderful, the inspirational and the beautiful – in the world and in the mirror.

I’d suggest – because I’ve no right to do more than suggest – that when you’ve mastered that, you’ll find that you’ve shifted into a New Cycle.

More advice – should you want any – is available in my book Life: A Player’s Guide