That’s how the film ‘Lucy’ ends.  (Thanks to Atxero for pointing me in its direction.)  It’s a Matrixy kind of a thing – Scarlett Johansson gratuitously destroying anyone who gets in her way, turning ‘life’ to a video game scenario as she develops new and unimaginable neural connections and expands her consciousness until all of her brain is being used, rather than the 10% or so most of us have been settling for.

I was woken up to this expanded consciousness idea some years ago – by Will, the guy I’m currently working with on remote viewing .  He was a little kid then.  He made it impossible for me not to notice that he was seeing things I couldn’t see,  sensing things I couldn’t sense and performing psychic tricks and feats that left me scrabbling to catch up and understand.

There are babies, children, teenagers and young people – even a few older ones – who came into life this time around with expanded consciousness.  In my book I called them the Version 2.0 players in this game of Life.  They are the ones who haven’t fully forgotten what is actually going on here – who they really are.  They’re struggling – many of them – to get along with the everyday details of life: social interaction, school, shopping, going to work… but that’s because they are holding an awesome amount of Light or Memory or Spirit or whatever you’d like to call it, within their consciousness.

One day, some meddling but oddly broad-minded scientist will take a look inside the heads of some of these people and discover something unexpected – extra DNA strand activation?  Something rather interesting around the pineal gland?  Neural pathways way beyond what the textbooks show?  A distorted and expanded corpus callosum?  I have no idea what, but something will appear.  I strongly suspect all of the above, as well as a transition from carbon based to crystal based life, but I’m no scientist, just an interested observer. They’ll probably label it a syndrome or dysfunction anyhow, because scientists tend to like norms and neat bell curves.

The rest of us – those who maybe didn’t come into Life that way, but have been jump-started by our special young people – are catching up.  They are waking us up to a new way of being and experiencing – and it’s wonderful.

“I know I’m obviously biased,” my daughter told me, rather apologetically, the other day, “but there are times when he seems to shine somehow…”
She was talking about her 3 year old son.  I’m biased too, but she’s right.  He does.  I was with the two of them at the weekend.  He was raking a flowerbed for his seeds in the garden.

“This is a good day, Mummy,” he said, quietly and thoughtfully.
She looked at him and smiled, slightly bemused.  “You say that every day,” she pointed out.
He looked into her eyes then and said, very pointedly, “But it IS good.”

I checked with her later,  He really does say it every day?  “Yes,” she insisted, “and we won’t be doing anything special – just walking along the street or eating lunch or something.  Then he’ll tell me it’s a good day.”

What a beautiful lesson that tiny little kid is giving his mother.  She believes she’s just about coping – managing him and his three month old sister and the home; she’s rushed off her feet and always feeling someone is losing out.  But the child sees past that.  He sees the goodness of every day and gives it back to her. 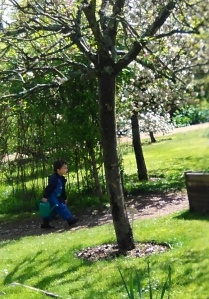 The next day it was my turn.  We were walking through an orchard.  I was aware that it was a pretty place – just aware.  My focus was elsewhere.  Then he stopped and turned to me.

“This is a Good Day, Grandma,” he said, with the gentlest emphasis on those words.

Suddenly I was able to feel it the way he was experiencing it – the family clustered around us, the crunching gravel under our feet, the azure sky with scudding grey clouds, the apple blossom and buzzing of the bees, the birdsong everywhere,  the utter beauty of nature in an English springtime – and I felt all the deep joy that had bubbled up inside him spilling into me from his deep brown eyes.

I felt, as I always have with Will or the many other Version 2.0s I’ve known, so honoured to be given a glimpse into his consciousness.

He’s one of the special ones.