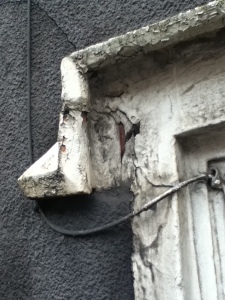 A lovely word – mullions – don’t you think? And the sheer romance of having stone mullions (window frames) was one of the factors that induced me to buy LIME Cottage.

Of course they’d been painted and were yellowing and peeling when I first saw the house, but my meticulous builder and his lads cleaned the outside windows back to the original stonework, even going to the local quarry at Doulting (from where the original stone came, all those centuries ago) and bringing back stone dust to mix with the filler for any cracks that needed repair.

The results were fantastic.  I was delighted. 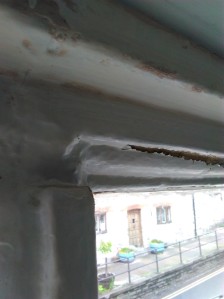 Then I began decorating the upstairs front room.  Without a thought I started removing the flaking paint on the window frame, expecting to sand it down and paint over it.  That was when I discovered that with minimal effort, I was revealing the stone on the inside too.

I beavered away with the paint scraper – some parts were easier than others, and had soon exposed a decent sized chunk of stone.

My Man Monday arrived the next day.  LIME Cottage and I like our Man Monday.  He’s a wonderful, intuitive odd-job man who adores old buildings and knows exactly how to treat them.  He comes on Mondays because that’s his day off from running his organic wholefood restaurant.  He was as thrilled as I was to see the stonework and agreed that it had to be cleared.  He showed me how to use various parts of a chisel to remove the paint and buff up the surface. 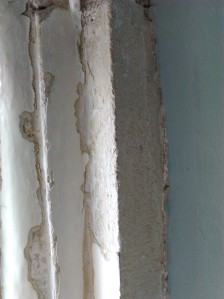 A YouTube video taught me how to re-putty the glass (surprisingly easy and fun – like playing with Plasticine) and I was happy.

I suspect the stone had remained untouched for centuries.  Then someone – probably in the 1950s, judging by the materials used, had skimmed a layer of plaster over the stone and covered it with a thick golden lacquer of some sort.  I remember the front door of my parents’ new-build house, in 1956, being covered with this same material, and my father’s deep delight and pride at having this new state-of-the-art finish applied to it.  Maybe whoever was the cottage’s custodian back in those days was equally proud of their work.

The next layer – in the sixties perhaps – was a very pretty pale turquoise – just the colour I probably would have chosen myself, had the mullions not decided it was their time to breathe again.  A few coats of ‘brilliant white’ gloss topped things off, but sun and many years of neglect had worked their magic, providing cracks and crannies for my chisel to get a hold. 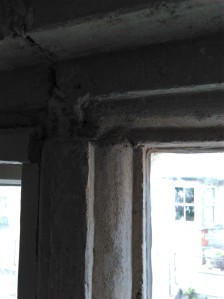 I’ve left flecks of the earlier coats here and there.  They are, after all, part of the cottage’s rich history, as are the dents and chips in the stone.

Sometime in the future, no doubt someone will decide to cover the stone again, with some new technological breakthrough.  That’s fine, and as it should be.  History doesn’t stop.  The cottage will do as it’s always done, adapt and change with the ages.

The stone mullions will continue to look out on the road below, The camper vans and hatchbacks, delivery lorries and tankers, tourists and neo-pagans added to their store of memories.

I love to imagine black-clad puritans and straw-chewing ploughmen passing beneath them; earnest men with pitchforks and muskets rallying to Monmouth’s rebellion; gents in curly wigs, smoking long clay pipes; ladies in lace and sprigged muslin frocks; farm carts and haywains; ponies and traps; horse-drawn coaches filled with journeying Victorians, keen to view the Abbey’s ruins; Dion Fortune and her retinue heading to secret ceremonies at her house, just down the road; eager young farm boys hurrying to sign up to fight in the Great War; heartbroken parents heading to church to mourn for them; hippies with flowers in their hair off to climb the Tor…

My beautiful stone mullion windows have seen all that and more, and caked as I am in stone dust and lead paint chippings, I’ve thoroughly enjoyed my intimate encounter with their story.