This wasn’t the post I was intending to write this week, but the Friday 13th events in Paris, and the Western governments’ entirely predictable responses have prompted me to insert a few thoughts on someone who for me is a new-found hero: a man who lived many centuries ago, but perhaps has something to teach us all today.

Ramon Llull was born to courtiers of Jaume the Conqueror – a mediaeval Spanish king responsible for taking Mallorca, among other places, from the Arabs.  Ramon became a page at court and later tutor to Jaume’s son.

Bear in mind that this was the time of the crusades.  Bitter wars between Christians and Muslims had been raging for well over a century when Ramon was born.  The divisions between the two cultures could not have been greater.  Hatred and distrust of all things Arab would have been endemic in his world. 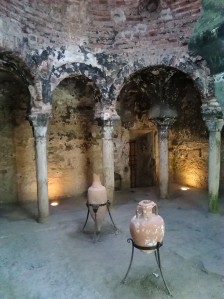 Perhaps, as a young man, he wandered amongst the beautiful Arab buildings in his home city of Palma.  He certainly thought deeply and studied hard.

Leaving his family, Llull went to live on a mountain in the centre of the island, taking with him an Arab servant, from whom he learned to speak Arabic.

Certainly, like every Christian of his day (and many in our own) he believed that his religion was the one true way and that Jews, Muslims and anyone who didn’t share these beliefs should convert.  Unlike his contemporaries, though, he did not believe this should happen at the point of a sword.  He proposed the use of logic – philosophical argument – to convince others. 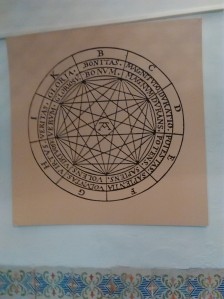 He produced intricate diagrams and many books which he was sure would convince anyone of the veracity of his beliefs.

He travelled tirelessly to visit heads of state across Europe and the Middle East, offering them his works and begging them to engage in dialogue rather than warfare.

Miramar, the site of one of Llull’s universities, on Mallorca’s north coast

He set up a series of universities, where young monks could learn Arabic and other less-studied languages, the better to engage in discourse with those of other faiths.

Ramon Llull had discovered a great truth.  He had realised, centuries before Einstein would turn it into a sound-bite, that the definition of insanity is

doing the same thing over and over again and expecting different results.

He was blazing a new trail and trying to move humanity on from endless, pointless bloodshed; he was proposing respectful, open dialogue and discussion at a time when the divisions were apparently intractable.

We have to start somewhere – why not with ourselves?  Might it be time to listen to his ideas?

5 comments on “Listening to Llull”