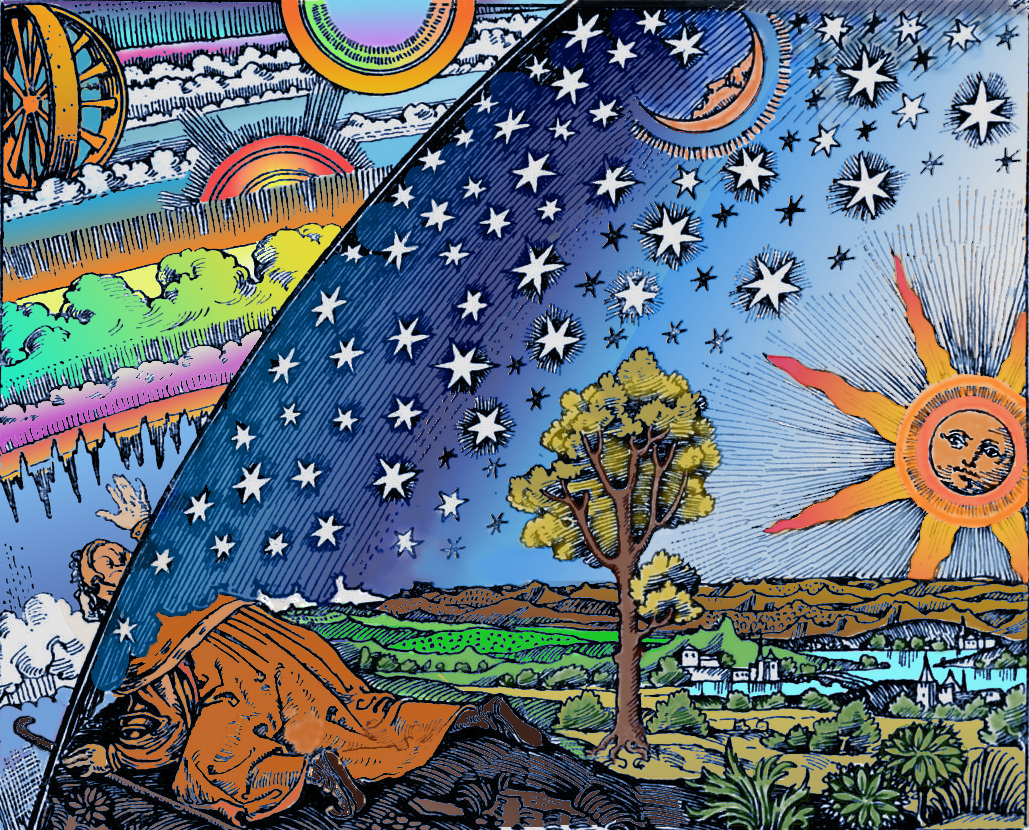 I love the Flammarion engraving.  Its an image that feels hard-wired into my mind.  It is, quite simply, my mission statement.

Yesterday I sat for many hours with a dear friend, engaged on one of those rambling metaphysical discussions that sometimes go round in circles and sometimes find a new, untrodden path.  I’d like to share what happened with you – my wider community of dear friends – and would welcome your comments and ideas on the implications of what was suggested…

So, specifically, we had agreed on several points:

“We could try asking my Guides,” I said.

Koimul, the guide I can sometimes channel, has, as regular readers will know, taken a recent interest in my explorations of metaphysical realms.  It felt like the right sort of question to ask.

As we’d hoped, Koimul was right on the case and happy to discuss our questions.  It soon became clear, in fact, that Koimul had been tuning in to our conversation and made several references to it in what followed.

We were told that certain sites we’d considered visiting  ‘WOULD ATTUNE YOU TO THEIR ENERGY’ and provide ‘ESOTERIC KNOWLEDGE FOR REACHING WHAT [YOU] SEEK.

We asked for a definition of what – exactly – we were seeking. (It’s so easy to get mired in obscurity when discussing these numinous ideas.)  Koimul called it ‘MAWDEN’ and defined it as ‘REALITY BEYOND FOUR DIMENSIONS’.

Next we asked about the ‘sacred’ sites and artefacts.  I’d read in Seth’s books that no place is, of itself, more sacred than any other, but is made so by the energy placed there by those who use it.  I’d always wanted some clarity on that, as certain places certainly ‘feel’ more special than others.  So were these places and objects some kind of ‘tool’?

‘NOT OF THEMSELVES,’ Koimul explained, ‘BUT THEY LEAD YOU TO THAT WHICH YOU SEEK’.

Okay, so how, exactly did that work?

We were told, ‘VISIT THE SITES.  LEARN WHAT THEY HAVE TO TEACH YOU AND FOLLOW THE PATH THEY LEAD YOU ON VIA SYNCHRONICITY’.  Koimul explained that the sites were not sacred or special in themselves, but that the knowledge that humans can’t always access is encoded or – literally – crystallised within the stones or artefacts in these places.  It becomes possible for us to access them if we are in the right frame of mind – that A-Thought state we had already identified as important.

With amazing clarity, Koimul went on to tell us how each member of the group who will be going on this trip has particular abilities to contribute and added ‘COMBINE YOUR SKILLS WITH WILLIAM’S SIGHT TO MOVE TO YOUR GOAL’.

That was unexpected.  William, my remote viewing partner, will not be joining us in person, but he usually gets involved remotely and views places we visit, sometimes seeing things we don’t.  This time, though, Koimul had a new role in mind for Will:  ‘WILLIAM WILL VIEW THE SITES IN ADVANCE AND HE WILL LEAD [YOU] TO THEM’.

The more I think about it, the cleverer Koimul’s idea sounds.  It seems to me as if what we’ll be doing is reversing cause-and-effect.  Normally I go and hang out somewhere and give Will the time or location (the cause).  He then views where I am (the effect).  Reversing it, though, means the effect – what Will ‘sees’ – is established before the event that ’causes’ it – us going there – has occurred.  We only arrive there because he says we have done so, even though it won’t have happened at that point.

Have I got that right?

Koimul appears to be preparing us to enter whichever locations emerge, having by-passed time and cause-and-effect and having neatly defied logic.  That should certainly put us in the correct frame of mind to be open to whatever synchronicity unfolds…