…Almost the active verb derived from ‘metacognition’, but with a few extra ideas thrown in…

Metacognition, as just about anyone reading this post will already know, is a wider knowing – those inklings, impressions, fleeting ideas and gut feelings that supplement and complement ordinary common-or-garden cognition. 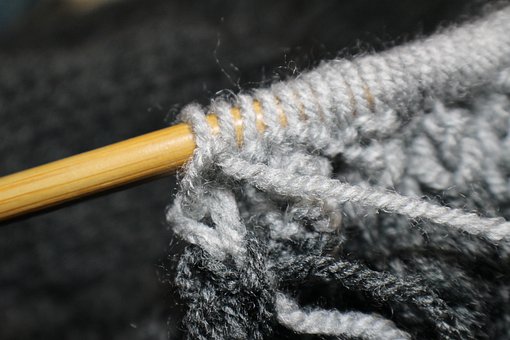 As for knitting, though…  I’ve always loved any kind of textile work and there is something almost alchemical in transforming a single strand of yarn into a complex and beautiful garment, using just two simple sticks and one’s own hands.

For me it can be almost a meditative practice – busying the body while freeing the mind, and creating a unique physical item as I do so.  I like to weave in different textures and colours as I go.  I like to think about how every stitch is a vital part of the whole, while appearing so tiny and insignificant; rather like ourselves, really.  Drop a stitch and the whole thing can unravel.

And how (and why?) am I combining the two into a newly coined word?  you may ask.

Well, for me, the last six months has been a grounding experience.  I’ve been heavily caught up in physical, practical day-to-day matters.  They have taken up almost all the time I might otherwise have spent pondering, writing, dreaming and wondering.  There’s barely been time or opportunity for reading, blogging, chanelling or long, rambling, metaphysical discussions with cherished friends.  There’s barely been time to miss such activities, even.  Instead I’ve been stuck firmly in this mundane human skin-suit, supporting, surviving, problem-solving and grafting away.  (The only reason I’m not digging bramble and stinging nettle roots out of my daughter’s massively overgrown garden right now is the heavy rainfall outside as the English summer fragments into autumn.)

What I have come to realise, though, is that throughout the whole process of rescuing my little family from disaster, helping them back onto their own feet, rebuilding their confidence, dealing with the practicalities of re-homing them and helping to make that home habitable, the metacognition skills I’ve been noticing and developing over many decades have become knitted into the very fabric of everyday life.

Metacogknitting is living human life and grounding ourselves entirely in the physical dramas, effort and heartache that entails, while always allowing those extra strands of ‘Knowing’ to permeate every planned action and thought.

It’s only now, as I reach the final weeks of my stay far from home and see things here settling down and being almost sorted out, that I can recognise how the pattern or blueprint of what I wished for them has come to pass.  It felt absurdly optimistic that I would be able to help to turn a desperate situation around in just six months.  The idea that these frightened, traumatised and hurt people would have a new home, close to relatives, and settle into their new environment seemed next to impossible, but I’ve learned enough, over the years, to know that holding firm to that idea and believing in it was crucial.  With deeply valued help from the wonderful Cheryl and Higgins, I learned to put that Big Dream out there, to trust that it would arrive in time and to focus on the tiny steps we needed to take, to make it a reality.

One stitch at a time, the garment grows.  Every stitch is vital.

Without all those years of practice, I could easily, in all the mayhem and stress, have forgotten to take note of the faint and fleeting metacognitions.  There was so much else to focus on.  At such testing times, though, they become more vital than ever.  I would wake at 3am, Knowing what new fears were surfacing in my little grandson’s mind, and how best to help him with them.  Later in the day, he’d pull me aside and share those fears and I’d have my response all ready and waiting.  A ‘chance’ unexpected meeting with someone would set me on alert, wondering Why now? Why this person?  What purpose do they have in this drama of ours?  There always was one.

Helping the family to integrate in their new community, I went with them on Monday to a village fete.  I managed to resist the urge to brush aside the young man asking me to buy raffle tickets for his stall.  He’d singled me out.  The metacogknitting reminded me that there’s a potential purpose behind every apparently random situation.  Sure enough, he called me that evening.  I’d won the prize.  When I went to collect it, we ended up chatting over a coffee at his kitchen table about his business and my daughter’s.  So many similarities and synchronicities.  They could help each other.  I’ve put them in touch.  Whether they act on it or not is their pattern, their blueprint, of course.  My step or stitch there was just to form a link between the two.

And that, of course, is what metacogknitting is all about.

J and I met in our teens.  We enrolled as student teachers together, we lived just across the corridor in hall, we learned the realities of teaching kids in tough London schools, we partied, we got drunk and we hitchhiked around the country at dead of night.  One of us owned the Bookends album.  We’d listen to this track and feel uncomfortable at the lyrics – How terribly strange to be seventy…

We passed our exams and got our first teaching posts.  We shared a flat for a while, then I left to get married and move somewhere rural.  She was my bridesmaid.  I had children; she didn’t.  We met up a few times, then just exchanged Christmas and birthday cards and hastily scribbled once-a-year notes about how that year had been.  Hers would tell of exotic holidays on far-flung islands; mine would tell of family budget ones in Devon.

This year, as I wrote her birthday card, I added a note to say I was back in the East for a while.  We were both retired now, and living not too far apart, after all, so might we meet up?

What a crazy idea.  We’d lived a lifetime apart, doing different things.  College was a distant memory.  Would we even recognise each other now?

Yes, we did recognise each other.  It took a moment to work our way past the portly bodies, the white hair, the sensible shoes and wrinkles, to spot the familiar old friend who shone from behind all that.  Thirty years, we worked out, since we’d last met.  The thirty years of experiences, pains and joys we had gained from life flowed between us.

Not quite seventy, but only a very few years off.  So were we the old people Paul Simon had imagined in his lyrics?  Perhaps – to any twenty-somethings passing by, that was how we’d look.  Those lyrics, though, are a young person’s idea of old age.

We did share a park bench for a while, but not quietly.  We talked of what we’d done, children we’d taught, how we railed against the education system with its focus on exams and fact-learning, fought for the rights of the kids and parents, struggled to open the young minds and encourage free-thinking and creativity.  We spoke of how we’d shared our ideas and experience, mentored young teachers.  We spoke sadly of how the government-controlled education system had finally driven us out, as the job we’d loved and devoted our lives to was subsumed by paper-pushing and statistics.  We’d both taken early retirement and headed off to educate in different, freer ways.  And now, we decided, was a time for pride and reflection, a time for relaxation without clock-watching, but not – oh so definitely not – a time to stop learning and wondering, thinking and discovering.