In the previous post, I spoke of how well the role of an ‘outlier’ would suit those who fit within the square, rather than the circle of Leonardo’s Vitruvian Man – the sensitive people who are more comfortable on the fringes of a society.

It would seem highly likely that the ancient outliers held a position of very high status within nomadic or migrating groups, since they were responsible for everyone’s safety and the success of the journey.  What happened to them, though, when the travellers decided to settle and build permanent homes?  I suspect that they retained their revered status within the tribe.  There is a small but important piece of evidence for this.

Within the last year – so I learned from a recent BBC archaeology programme – it has been discovered that Avebury – the world’s largest stone circle – originally had a building at its centre, and that building (which predates the stones) was … a house. 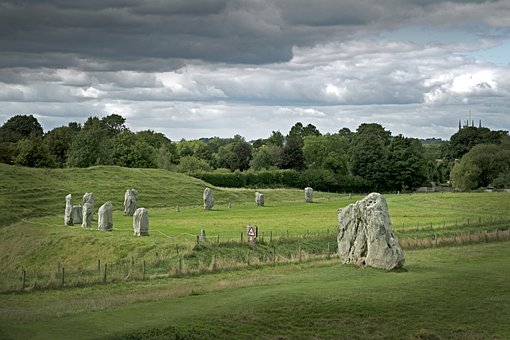 At first, this seems something of a let-down.  For years we have venerated and romanticised these stone structures as the site of religious rituals, meaningful astrological observation or sacrifice to pagan gods.  Are we now to believe that they went to the huge effort of building a stone circle, a series of elaborate avenues and other complex structures to honour a simple house?

I suspect that is exactly what they did.   The symbolic importance of the first settlers’ homes would have been immense.  This was the starting point for a new way of life – a new beginning for their society.  In myth, traditional stories and legend, the House of a clan, family or tribe is revered – not the building itself, so much as the dynasty it represents.

It’s hardly surprising, then, that our distant ancestors chose the site of that first home to build their stone circles as a gathering place.

The interesting thing about stone circles, though, is that they very often have outliers – stones placed at a distance from the main structure.  Often these stones mark a particular view, such as the only position from which a sunrise can be viewed in a gap between distant hills on the solstice.  They can also mark the beginning of a causeway or avenue leading to some other important place.  I think the idea of a central gathering place was hard-wired into these people, but so was the need and reverence for the outliers.

So does the structure of a settled society render outliers/ ‘square fillers’ obsolete?

In many primal societies people with this special skills-set – heightened senses, an ability to link telepathically to other times or places, other dimensions, even, and a degree of separation from the everyday life of the society – are appointed as shamans, healers and seers.  Their role can be to travel between worlds, to care for the psychological health of the group, to look into the future or past to provide the answers they need or to uncover the reasons for sickness or misfortune.  They are the psychic equivalent to the outlier – visiting regions the rest can’t reach and feeding back necessary information.

Humanity is always journeying forwards.  We have seen that these talented and unusual individuals are not particularly popular with leaders and experts in our society’s structure.  Some, though, manage to have a profound effect despite officialdom.  When they do, they are responsible for creating the huge shifts in perception that move society into new areas.  The Einsteins, the Teslas and the Newtons are able to access insights and understanding simply not available to the common man or woman.  These people work silently, compulsively, alone and – for reasons we’ll see later – are able to make huge leaps to a higher level of understanding of how the universe really works.

I’m fully aware that so far I’ve written well over 3000 words on this subject and not yet addressed the core issue I promised to discuss – an explanation of how autistic perception works.  Stay with me.  The first few sections were an overview, showing how our present Western society isn’t structured to encourage or promote autistic perception, while others apparently are or have been.  They have also demonstrated the persistence of autistic perception and touched on its value to society.

The next section will begin to look more closely at what it involves, while after that, I’ll attempt to draw in research from three very different disciplines so that we can finally examine what autistic perception is, how it works and the benefits for the population as a whole.

Yesterday, here in the south west of England, it didn’t rain.  In fact the sun shone, birds twittered, a few white clouds scudded across a fresh blue sky and all felt good, at last.  January was the wettest on record here, but January is gone.  Snowdrops are out and there is the promise of spring.

My friend (one with a car) was off to Avebury to celebrate Imbolc with fellow druids, and offered me a lift.

“You don’t have to join in with the ritual,” she told me.  “You can go off and do your own thing.”

How well she knows me!  How good it is to have friends like that.

I accepted eagerly and donning many layers of clothes (druidic rituals tend to go on a bit, so I knew I was in for a protracted wander) I headed off to meet her.

We left saturated Somerset behind and entered the chalkier, slightly better-drained hills of Wiltshire.  True, the road leading towards Avebury was bordered by large swathes of flooded field where flocks of seagulls swam and bobbed cheerfully, but grass and trees could still be seen, the road was dry and the water wasn’t deep enough for swans – mere puddles by comparison to The Somerset Levels.

So after a much-needed cuppa at the National Trust cafe, we separated – she to join her garlanded and enrobed companions and I to saunter off alone; to wander between two worlds.

It seemed an appropriate way to experience Avebury – a place unique in its ability to blend cultures and millennia.  Way back in times with far too many zeros in their dates to be even vaguely imagined, huge earth ramparts and ditches were carved out across acres of this landscape.  A massive mound was constructed from chalk nearby.  Stones the size of a modest house wall were erected in circles and avenues.

We can’t begin to guess what ceremonies, rituals or meetings took place in this fantastical place.  Certainly there are books claiming to decode and explain all, but how could we honestly begin to fathom the subtleties of the beliefs and aspirations of that long-departed culture?

When the first antiquarians, wearing long curly wigs and wildly unsuitable clothes, started to recognise the site’s significance, they were met by surly villagers, busily engaged in lighting fires beneath the stones to break them into usable boulders for constructing their cottages and farm buildings.  Now the two cultures agree silently to differ and co-exist cheek by jowl, scrutinised and invaded alike by summer hordes of tourists.

Few tourists yesterday though.  The Imbolc celebrants drummed and intoned in their circle.  Day-trippers strode purposefully around the site as they sought to exhaust their dogs and children.  Circles within circles, wheels within the car park…

I felt equally removed from both groups.  Seeking out a huge and beautiful stone I leaned against it, closed my eyes and let myself drop out of time.   No visions of ancient ceremonies or connection to ancestors, just a profound gratitude that this stone had stood here through the ages and was now offering me shelter and support.

If, when my eyes were shut, I saw a green-brown sky with a glittering grey rock moon, or when they were open I saw the quartz glinting star-like from a thousand places in the megalith, it’s all one.  Seeing stones and seeing stars – is there a difference?

I felt uplifted and happy and full with the wonder of the day.  So, I’m certain, did the druids and the dog-and-child walkers.

So create your rituals, ye neo-druids; excite and exhaust your small companions ye motorists, and inside my dreams I’ll weave my invisible dance amongst you all and between the different dimensions of Avebury.