I have a friend, here in Glastonbury, who we’ll call Mark.  He’s a talented wood carver and one of the most generous people I know.  Every time we meet, he has some lovely trinket or other which he wants to give me.  Apparently he does it for all his friends.  He comes into the story later, but I had to put him there before I started.

Now for the story. 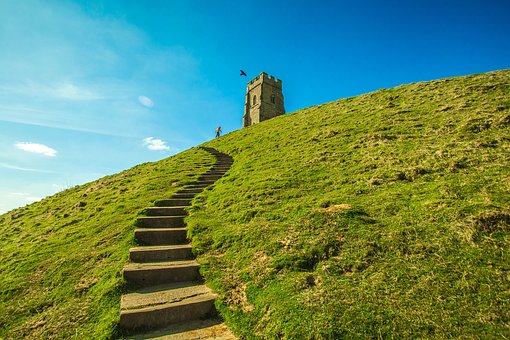 There’s a lovely lady I met several years ago at a conference.  She’s a spiritual seeker, a lover of trees and nature and a very caring, sensitive person.  She adores Glastonbury, and despite living in a city in Switzerland, she comes here for short visits whenever she can.  We always meet up when she’s here, usually in town for a meal, but this time I felt a strong urge to invite her to my home.  I never question such feelings any more – just act on them.

She only had two days to spend here this time and she’d spent the first hunting for a special object that would remind her of Glastonbury and embody the spirit of the place for her when she was far off in her own country.
“It could be anything,” she said. “Maybe I’ll find it in a charity shop. Maybe it will be just a stick or something simple.”

She showed me an egg-shaped stone she had bought, carved from local crystal.  I could tell that, much as she liked it, she wasn’t convinced that this was the special object she had come to find.  Now she had a dilemma.  Should she spend the next day – her last – hunting for The Object or should she relax and enjoy the delights of Glastonbury while she could?

“Would you…  I feel bad for asking, but could you ask your Guide?” she asked.

Then I knew why I’d needed to invite her here.  She’s had advice from, Koimul, my spirit guide before.  I opened the computer and asked Koimul if it would be possible to seek advice for her.  Koimul said it would.

“Did she find the object that will allow her to remember Glastonbury when she is at home, or should she search for it tomorrow?”

Sometimes the responses I receive come ‘out of the blue’.  Sometimes I can feel them – or snatches of them – just before the pendulum spells out the replies.  I certainly knew what the first part of Koimul’s reply would be before it came.  I also knew that it wouldn’t satisfy my friend.

MUCH OF GLASTONBURY LIVES IN HER HEART

It was true.  We all carry the essence of the places we love within ourselves and can draw on feelings and memories whenever we wish to.  In my mind – because I knew my friend wanted more – I asked for advice on an object.  Koimul was ahead of me, though.  Without pausing, the message continued and I became aware of the word ‘talisman’.  It was a perfect way to describe what she sought.

Slowly, as the crystal wheeled around the keyboard, I realised what was coming.  I started to laugh with utter delight.  My wise guide had the perfect solution!  The words that were spelled out said:

This is where ‘Mark’ re-enters the story.  Once, he and I had been discussing Dion Fortune – a writer and occultist who had lived in Glastonbury early in the last century.  He told me he had recently been asked to cut down an overhanging branch from a yew tree which had been in Dion’s former garden, just along the road from my cottage.

He had, he said, used every scrap of this very special wood to make a wonderful set of runes and other items, because he felt that something of her presence remained in it.  He had given me a tiny pendant, carved from a fragment of the branch and hung from a leather thong. It bore the symbol for the letter I in Ogham, as well as the word for ‘yew tree’.

The strange thing is that although it had been given to me and was a lovely object, I had never felt it was mine.  I’d worn it once or twice, but always I felt uncomfortable – as if I had no right to this, and it was meant for someone else.

Koimul’s message made perfect sense to me.  This little pendant (she’d said it might be a stick!) encompassed all that my friend loved about Glastonbury.  I rushed upstairs to find it, hurriedly told her its background and joyfully handed it to its rightful owner.

When she had stopped crying, she slipped it over her head and it looked perfect.  It belonged with her.  There was just enough light left in the evening sky for me to take her down the road and show her the tree it had come from.

Another reminder of how magical life can be when we let go and allow it to gently unfold.